The Karapiro Home: a lived experience

BY PAUL GERAETS. ORGINALLY PUBLISHED IN 2013.

Overlooking Lake Karapiro a few kilometres south of Cambridge, this beautiful home was designed and built for Jayne Baker and Jeff Allen.

I first met Jayne at the Waikato Homeshow in October 2007. She presented me with a concept plan for a home using earth brick for the walls. Jayne asked me if the plan could be adapted for rammed earth. I replied that with a certain amount of design modification and fine-tuning of the concept we could prepare working drawings that would stay true to the integrity of the original concept plan and still be cost effective. Jayne explains her experience.

We went and visited three other homes that Paul had built, and it convinced us that we could get what we wanted. Going to a two-storey home was initially a concern until we saw a two-storey home in Hamilton and saw that it could be done.

Structural design presented numerous challenges, but a close working relationship with the structural engineer Terry Steven was most productive in providing buildable solutions. Our thorough approach to developing the plans helped significantly with Waipa District Council’s confidence for issuing consent for such an ambitious project.

“It was a difficult project as we already had concept/architect drawings for earth brick but Terra Firma were able to readjust the plans so that it could be built in rammed earth. Terra Firma was able to produce working drawings” says Jayne.

We started construction just before Christmas 2008. After completing the ground works, concrete foundations and floor slabs, we were ready to start ramming the earth walls in March 2009. It took us 2 months to ram over 300 tonnes of rammed earth walls.

Jayne explains the feature that they like is that, “our home is natural, non-toxic and blends in with the environment rather than being imposing, the colours and the materials are part of the landscape. We were able to build a large home that is healthy and non-toxic, sustainable and eco-friendly.”

As we finished off the rammed earth walls for the separate structures (the home is actually a collection of buildings connected by a galley), we would form and pour the concrete bond beams that tie the walls together.

Once we had all the walls and bond beams completed we framed the roof ready for the clay tiles that Jeff and Jayne had imported from Spain. With the roof on, Jeff and Jayne showed their appreciation for all the hard work with a well-received roof shout for the team.

From this point on we got into the finishing work, with timber joinery, poplar tongue and groove ceilings and then a solid timber kitchen and other cabinetry – all finished with natural oils.

Our home is almost maintenance free, apart from re-oiling the timber joinery, which we have done once. I would expect to re-oil every one to five years (depending on weather exposure), which is a simple process and does not require skills – much easier than painting…Our reason for building this type of home, is to have a home that will last for a very long time and be low maintenance for when we are older. We want a house that our children and grandchildren and generations to come can live in. Also, I don’t have to worry about the children putting their hands on the walls.

Jeff’s experience using granite (Jeff owns Waikato Stonecraft Ltd) meant that he was able to apply his knowledge and resources to innovate a very useful and surprisingly cost effective new detail – granite sills for the exterior joinery. Jeff also made significant contribution to the tiling and plastering details associated with the rammed earth walls.

Construction finished up just prior to Christmas 2009 and Jayne, Jeff and family moved in. Time to build for this 600m2 structural rammed earth dwelling was just on a year. After living in her home for the last 3 years Jayne was asked if she would recommend a Terra Firma rammed earth home;

“Yes, because it produces a warm inviting home that is non-toxic, it breathes, is largely maintenance free and has a long life expectancy. We are on a farm and I personally think it’s great for that extra space and the walls are extra thick. I like the idea of using sustainable timber, not native. The oils are non-toxic, there is no polyurethane used.

The coloured and oiled concrete floors are low maintenance; we just dress them up with rugs. They are easy to keep clean with a vacuum and steam mop. I vacuum every couple of days and steam mop in the kitchen.

For such a big home I can look after it myself while running the farm too. People say that when they visit our home it smells lovely from the oiled timber and its warm and cosy. It’s an easy place to come home to –warm in winter and cool in summer. We have no condensation at all – any moisture gets absorbed. We have been healthier with fewer colds since we have been here. It is also not unnaturally dry; the walls perform as a self-regulating indoor climate control.

“I would recommend Paul’s company; he is the most knowledgeable in this type of building in this country. We would like to encourage more people to build in this way” adds Jayne.

Over the last 3 years since Jayne and Jeff have moved into their home I have maintained contact with them, occasionally visiting them to see how the walls are curing as well as answering any questions they may have. In the time Jayne and Jeff have been in their rammed earth house, they have turned it into a beautiful and comfortable home.

Also, since construction of the ‘Karapiro Home’ our solid granite exterior window sills have been supplied by Jeff’s company, ‘Waikato Stonecraft’ for every home owner that wants them. 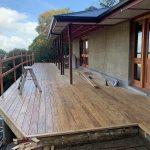